Here we are going to review some motorcycle docs and movies that hopefully will inspire you to ride. This first installment is a documentary that is on YouTube about a female motorcycle racer. 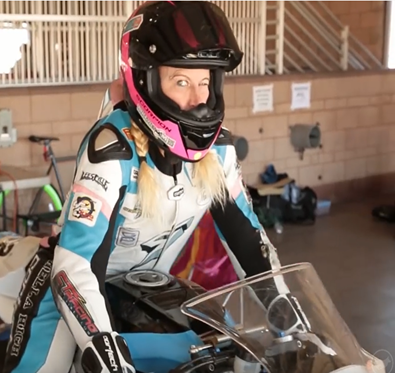 This video is a must-watch if you are a woman who is considering racing motorcycles. Presented by BuzzFeed it is titled Race like a Girl released on YouTube January 30, 2015.

Krystyna Kubran is the subject of this documentary, she races motorcycles in California through a national organization called WERA. Krystynan rides a Kawasaki BX10 1000 cc racing bike.

Krystyna has gravitated towards the male-dominated pursuits, she is a mechanical engineer making turbochargers, and she races motorcycles.

The race day featured in the video Krystyna competed in two races. First race a 6-lap Superbike Expert event that Krystyna finished fifth in her second race, she was also fifth. You girls out there who are toying with racing motorcycles look this video up on YouTube and get inspired.

If you are a lady motorcycle racer, dress in style wearing Leather Motorcycle Racing Suit.

This next video is from 1984 about motorcycle hill climbing.

This video is thirty-five years old and in poor quality in picture and sound. Nonetheless, it is included in this video line-up because it shows motorcycle hill climbing as it really is.

The event takes place 30 miles south of Salt Lake City, Utah near the Utah State Prison, the hill, 1,500 feet of verticle climbing. If you are a fan of motorcycle hill climbing, this video is the one to watch.

You see the bikes that were used, how it was done back then, and who the riders were. In 1984 the Widowmaker was in its 21st year with only four riders winning the event in all that time. 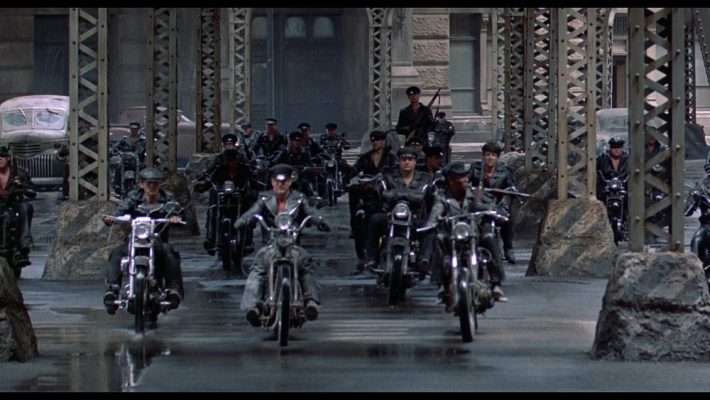 This next installment is a movie form 1984 titled Streets of Fire. Streets of Fire star Michael Pare, Willem Defoe, Diane Lane, and Rick Moranis as the main characters. The plot runs like this, home town girl Ellen Aim (Lane), who is now a famous rock and roll singer, is giving a concert for her hometown fans.

Enter Ellen’s ex-boyfriend, Tom Cody (Pare), who is hired by Ellen’s boyfriend and manager Billy Fish (Moranis) to rescue her. Raven Shaddock (Defoe), the leader of the bombers, covets Ellen and is holding her hostage in a bar under his control, Torchies.

The backdrop for this romp in violence the fictitious borough of Richmond in a time that is a mix of the 1950s, the future, or the present.

Described in the trailer as:

A place where rock and roll is king, the only law is a loaded gun.

Directed by Walter Hill and released by Universal Studios, this movie did not get rave reviews but has since acquired a cult following.

You are a fan of motorcycle movies; this is a good one to see, click the link above, and watch the trailer.

You want to look as though you know your way around motorcycles wear Mens Motorcycle Leather Vest.

One More for the ladies, this video is about a 10-year-old girl who races motorcycles. She lives in Gettysburg, PA is ten years old and races motorcycles at 130 mph. Her father is a racer, Kayla saw videos of him racing, and she wanted in, she was five.

Dad, Dave Yaakov, said Kayla was not very good the first few times out, she liked it, she hung on and is now winning races. Kayla has won many trophies and wants to continue as a pro-racer.

Your child wants to race motorcycles, let ‘em ride, get inspired form videos like the one linked here. When you accompany your racing kid to the track, look good wearing Men Motorcycle Leather Racing Jackets. Do not forget to listen some great Motorcycle Songs as well.

Like us on Facebook, check us out on Instagram. As usual, hop onto Wicked Stock and check out all the motorcycle gear and accessories in stock for your riding pleasure.