If you have money to burn and a love of the Hollywood-inspired lifestyle, then you have come to the right place. Classical TV and movie motorcycles that are coveted collector’s items since they appeared onscreen are now available to purchase if you have the cash.

Here are four big and small screen motorcycles available to purchase so you can improve your cool factor.

Fans of Led Zeppelin will recognize the Sunset tripper immediately. A Triumph chopper owned by the main drummer Jon Boham. Built with a spring front end and a large black leather seat with an added backing. In the movie, “The Song Remains the Same,” which came out in 1976, the drummer himself rode it in a scene. This scene propelled the Tripper into fame, and its popularity grew.

For 26 years, a Sunset Tripper stayed on display in a front window in a restaurant in Europe. Profiles in History states that this motorcycle is historically beautiful and well-kept, as it can still run even today. It has a bit of wear caused by the march of time, but anyone who sees this bike sees that it’s in excellent working condition.

The perfect item of clothing that you have to wear when using this motorcycle are motorcycle jackets for men. Imagine slipping a leather jacket on your body and sticking your keys into the ignition of Tripper and riding off into the Sunset. It’s a sensation you’ll never forget.

If you’re not a big motorcycle jacket person, then you can switch to a men’s motorcycle vest. While wearing your vest, you can fully embrace the feel of the weather on your skin, the sunshine, the wind, the spray of ocean water as you drive down an Oceanside highway. There’s nothing better than the hum of your motorcycle beneath you, mixing with the smell of the salty ocean. 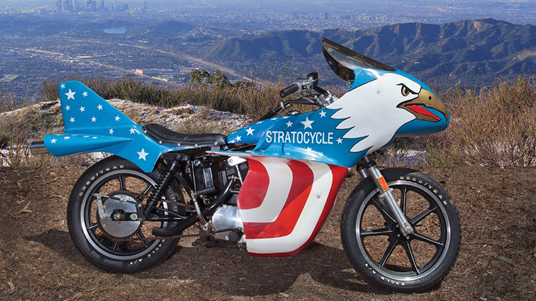 Maybe you like bikes that have a lot of personality. In that case, you’ll love the one and only Stratocycle. Once owned and used by Evil Knievel himself in the movie “Viva Knievel,” this bike is actually a 1976 Harley-Davidson XLCH Sportster.

To safisy Knievel, it received a major paint job to mirror the stripes in his classic white jumpsuit. Body shop mechanics also altered it and attached two wings around the seat. It can’t fly, but it sure does look cool, and that’s what matters. It has a blue background base with screaming eagles, red and white stripes, and white stars.

Below its wings are red and white stripes vertically painted. Stratocycle’s in-your-face paint design is very loud and very American.

Leather motorcycle gloves are an absolute need when handling this daredevil machine. This bike is a wild child in both personality and handling. You need the grip you can get when you’re on the back of this bike. Primarily since it was found to only have a back break but not a front brake.

Now it’s time to highlight a motorcycle from the small screen.

People who were teenagers or twenty-somethings during the 1970s will recognize this motorcycle immediately. Owned by none other than the Fonz himself, the last bike we talk about is the 500cc Triumph Trophy. Arthur Fonzerelli’s bike was actually modified with high handlebars and silver paint.

This particular model, used in the show Happy Days, was built in 1949. The show hired Bud Ekins to modify the motorcycle and give it its classical look. It wasn’t made that way from the manufacturer, so unless you buy the only 3 bikes in the world that was changed, you won’t find it anywhere else.

Once you buy this biker, you aren’t finished shopping. You have to complete your look with a men’s black leather biker jacket. It’s The Fonz’s motorcycle, so you have to wear a leather jacket if you own his bike. It’s probably the law in Hollywood.

After reading about these sleek bikes and the clothes that pair well with them, you must be in a shopping mood. So pull out your wallet and visit Wickedstock to find these clothing suggestions and so much more.