Are they saying the sound of an unmuffled or modified motorcycle exhaust is going to make the driving public pay attention? More people who drive automobiles are driving in a state of inattention than in the past (pre-cellphones).

Distracted drivers who are texting, talking on the cell, or just plain not paying attention, will suddenly snap to at the sound of loud motorcycle exhaust.

That in itself is going to prevent an accident? The roar of a loud motorcycle could cause a driver to jerk the wheel and run over the biker. Okay, there may have been occasions where the roar of loud pipes alerted an unsuspecting driver, and an accident did not occur.

Really, how many times do you think that does occur?

Not enough to make it a traffic law. More than likely, the loud pipes directed other drivers’ attention to the location of the motorcycle. Consider the sound a motorcycle’s exhaust is emitting from the tailpipe at the rear of the machine.

Whether or not you have modified your exhaust, other drivers will see you wearing your Motorcycle Armor Leather Jackets.

Sound travels at what speed? 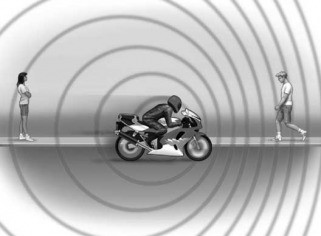 How easy is it for a driver in a car to hear the exhaust sound when the driver is about 60 feet ahead of the sound?

You will not create the Doppler Effect when drivers see you wearing Men Motorcycle Leather Racing Jackets.

Why Aren’t The Loud Pipe Enforced?

All the traffic on the street is waiting at a red traffic light, and a big bike rolls up and revs the pipes several times. Annoying isn’t it, but, you know where the motorcycle is, don’t you?

They want to be heard, and that is a noise hazard for others on the road as well as the neighborhoods they ride through.

Here is a quote from a state’s definition of muffler requirements:

There is no mention of the decibel level that is considered legal to avoid a noise complaint. Most states only define the factory-installed muffler requirements, not the noise level.

The decibel level enforcement is often left up to the local jurisdictions. There must first be a complaint describing the annoyance level of the noise to enforce noise violations.

You will undoubtedly sound off fashionably while riding wearing your Men Leather Motorcycle Pants.

It is not that loud pipes save lives, in some rare occasions they might, the real secret to survival is to be seen and using the bike’s horn. Some horns are not up to the task; there are modified horns on the aftermarket that will work very well.

The other riding defense is to ride as though the other driver does not see you. Your safety on the highway while operating a motorcycle is mostly your responsibility, not that of the other driver.

Wicked Stock has all the riding accessories, gear, and apparel you will ever need to ride a motorcycle, log on, and see what we have.

Such as Men Textile Motorcycle Pants or Motorcycle Winter Jackets for Men Online, we have it all.